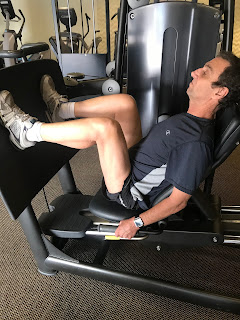 I’ve started working out in the gym in an attempt to bulk up my skinny body without getting back the fat I lost during this process (My cruising weight prior to all of this was around 175, it’s now 160..which is much healthier.)  I started out with very very light weights.  However, I’ve had to suspend my workouts since I’ve developed some shoulder stiffness.  My oncologist assures me it’s not due to any treatment, so I’m going to see an orthopedist and I’ve been getting some acupuncture.

Got my first post chemo haircut yesterday! That’s pretty significant.  It’s super wavy right now.  Pre-chemo, I had some flecks of grey.  Interestingly, there is no grey in the new crop of hair.  I suspect that will change.

Received a significant update on my biopsy yesterday.  As I mentioned last time, my doctor sent my results to ClonoSeq, a new analytical tool that can determine whether or not my two cancers came from the same stem.  And it also is much more sensitive than standard tests to determine if I have any active cells.  The results are:
1) the multiple myeloma and leukemia are not from the same stem.  One did not cause the other.  It is mostly just bad luck that I contracted a second cancer, although it is still possible that the myeloma treatment created an environment conducive to the growth of the leukemia.  But from an ongoing treatment standpoint, each needs to be addressed separately.
2) to a measure of 1 in 1,000,000 cells, no active cancer cells were detected.  Specifically, the report says: “Test findings are consistent with a lack of detection of either original clonal population.”  Initially, that caused my doctor to suggest I was cured.  But when I asked him if I could say that here in my blog, he suggested:  ”You can say – I am in the most stringent CR (complete remission) possible, no disease is detectable by the most sensitive tests (MRD-flow and NGS for V(D)J) are both negative).  Cure = 10 years disease-free!  Having said that, depth of remission is related to duration of remission.  If you have negative ClonoSeq at one and 2 years you are probably going to stay in remission a long time or forever.”  I’m suspecting that his not using the adjective “cured” maybe following the Jewish custom of not giving a “kinehora” (tempting fate).  But all in all, this is fantastic news.

The ongoing plan for now is to have biopsies every 6 months.  Blood tests and doctor visits monthly for the next six months.  I’m not on any chemotherapy or steroids.  Just some anti-viral and anti-fungal meds and some mineral supplements (magnesium and potassium).  I’m also on meds to treat the steroidal diabetes that was caused taking steroids for several years. And that is working quite well.  My glucose is normal.

In unrelated news, we’ve been enjoying spending time with our 2-year old granddaughter Madison.  We have a weekly pajama party with her on Tuesday nights.  Lately, she’s been having trouble settling down to sleep.  So, I’ve gotten into letting her fall asleep in our family room while we watch Rachel Maddow. That usually puts her out in about 20 minutes.  Plus, she now knows what “quid pro quo” means!