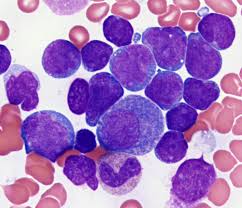 I had hoped that this blog update would be a celebration of the end of overnight hospital treatments.  Indeed, I completed my last round of Hyper CVAD treatment on Feb 4 and happily skipped out of Cedars Sinai expecting not to be admitted back for any admissions. However, I spiked a fever the following Friday and was readmitted for the weekend.  The fever was a not unexpected result of the amount of chemo my bone marrow has received. There was no associated infection.  It was just that my bone marrow had taken quite a beating with 12 chemo sessions over the past 9 months.  My immunity levels were near zero.  In fact, I had NO white blood cells for about a day.  But, as expected, I began to recover and was sent home on Monday with the expectation that I would just get progressively better.  And I have been.  Right now, I feel pretty normal.

The results showed that 1 in 10,000 cells did look suspiciously like a cancer cell.  That one cell can replicate quickly and result in full blown leukemia.  In other words, I’m not in remission…I’m in relapse.  So, continued treatment is necessary.

Here is the plan:

More chemo won’t help.  I’ve already had a shit-ton.  So, starting March 11, I will be admitted to Cedars.  A PICC line will be reinserted (the one I had was removed last week) and it will be connected to a fanny pack sized pouch that contains a medication called Blinatumomab.  This is an immunotherapy medication that specifically targets the antibodies that were detected in the biopsy.  They will keep me in the hospital for 2-3 days to see how well I tolerate this medication…as the side effects can be very severe if my body doesn’t like it.  Assuming all goes well, I’ll go home and wear this “fanny pack” for 4 weeks while it continuously infuses me with the medication.  After four weeks, I’ll get another biopsy and if it there are not active cells, that will probably take care of this phase of the treatment.  If not, I’ll be connected for 4 more weeks.

I will also be headed for a transplant using cells from a donor.  Good news here is that a donor has surfaced and he is a perfect 10/10 match.  Assuming he can be contacted, is healthy and is willing to do it, I’ll be scheduled for a transplant in a few months.  If the transplant goes well, I’ll be cured of both the leukemia and the myeloma.

This continued plan generates many concerns.   Such as:


What is the long-term prognosis? At this point, according to my doctor, it will depend on a lot of things such as the donor characteristics, my overall health etc.  So that merits further discussion.

Needless to say, I’m depressed that I’m not finished with treatment and anxious about both the short-term discomfort and the long-term prospects.  My gut says I’ll be OK.  And of course, I’m willing to endure all of this if it results in a cure.  Nothing is certain, but I intend to soldier forward as I always do.  I’ve already been through a transplant, so I basically know what to expect there.  This will be a little different is that I have an outside donor, so I’ll have to take anti-rejection meds for a few months after the transplant.  Side effects are usually pretty benign.

So that’s the latest.  As always, I appreciate your love and support.  I’ll update you as things come together.